SMARTS Update: If great apes get civil rights, what about smart machines? 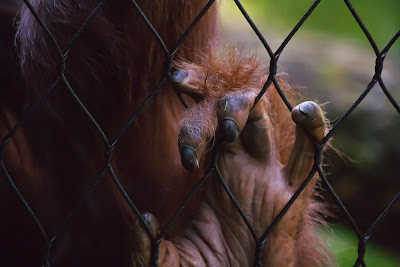 We humans pour our empathy upon every creature we encounter until we decide we want to use them, or they’re a nuisance. Then empathy goes up in smoke.

You remember Darwin the Ikea Monkey. He was found wandering in the parking lot beside an Ikea store in Toronto in the late fall of 2012. He was wearing a very nice sheepskin coat and a diaper. He either picked the lock on his owner's car, or she left the door open while she went shopping, and out he went, causing consternation. He was captured and held by animal control. The animal control officer, who'd never dealt with a monkey before, got the owner to sign Darwin over to the authorities who sent him to “sanctuary,” a place called Story Book Farm.

The officer may have said to Darwin’s owner that in the city of Toronto, you can't own exotic animals, there might be a fine, though he didn’t know for sure. There are certainly no provincial laws regulating who can hold or display exotic animals. Pretty much anything goes in Ontario other than outright cruelty. Darwin’s owner later sued Story Book Farm for Darwin's return. She told the court she had been misinformed about fines, and she wanted Darwin back. There's an interesting video on YouTube in which she gets into her car, surrounded by journos with their cameras whirring, and holds up Darwin's Christmas clothes for their inspection. An elf outfit. So cute. When asked, she says it's not right for Darwin to be held in a sanctuary, because..." he's not a monkey, he's my son."

In court, the representative of the sanctuary explained that Darwin was doing well, that his hair was growing back because he no longer wore clothes, and he was learning how to be a monkey, not a son, again.

The court decided sanctuary is where Darwin belongs. Free of human whimsy at last.

Darwin’s story seemed to have a story book ending. But then, last month, the sanctuary, a volunteer run place about an hour's  drive outside Toronto with a donate button right up top on its home page, declared it was being evicted. Apparently, the sanctuary needs a quarter of a million dollars by June 30 to buy another piece of land, or its monkeys will have no place to go. Story Book Farm styles itself as the only small primate sanctuary in Canada (there is another called Fauna Sanctuary in Quebec but apes are kept there). Story Book’s CEO, formerly in law enforcement, has been taking in stray primates from biomedical labs, or other places of pain, for fifteen years. Among Story Book’s denizens is another monkey called Pockets Warhol who makes paintings you can buy.

Of course Story Book launched a crowd-funding campaign and spoke to the newspapers. Jane Goodall recorded a statement of support. But after a few weeks, they got only about $800 in pledges.  Darwin’s ascent to YouTube fame had been followed by the usual fall to the bottom. Things were looking dire until a supporter kicked in $100,000. Still more is needed to spare the 20 monkeys living at Story Book from the big blue needle and Exeunt.

If you want to keep Darwin and friends alive, go to Story Book's website right now and donate. There you will find all sorts of interesting facts about the laws and regulations on exotic (meaning non native)animal ownership in Canada but most particularly on experiments on animals for science.

On the website there is a link to the Canadian Council on Animal Care, a federal organization that keeps statistics on how animals are "used" in science. The use and reuse of that word in the document gets more and more chilling. (No lists are compiled of studies done on plants or other life forms, though cognition science has begun to show that every kind of living thing has the capacity to sense, to feel, and therefore to decide, in short displays intelligence.)Reports to the Council are mandatory for any institution that gets grants from national science funding agencies, but others (such as pharmaceutical companies) do not have to report. That means the site's figures underestimate reality. So I was astonished to read in the last report (dated 2011) that 3,333,689 animals were  "used in science (research, teaching and testing).”

The three most commonly used sorts of animals were fish, mice and rats. Some 61% were allegedly used for fundamental research. At least 4,355 animals studied were nonhuman primates-- apes and monkeys, like Darwin the Ikea monkey, or the orangutans at the Toronto zoo, in other words, animals whose intelligence and emotions are most like ours.

Do these experiments hurt? The experiments are divided into categories according to invasiveness. The least invasive, category A, is labeled “most invertebrates or live isolates,”  as if invertebrates do not suffer pain from invasive procedures. That would be news to an octopus. Octopus and squid may have no backbones, but they are smart enough to recognize and remember you if you get their attention, and to take evasive action if you’ve annoyed them. One leading researcher, Jennifer Mather of University of Lethbridge, explained to me that if you perform surgery on an octopus, it will almost immediately find a way to untie the sutures. She also says they have distinct personalities. Category B includes experiments that cause little or no discomfort or stress. Category C includes experiments that cause minor stress or pain of short duration. Category D experiments cause “moderate to severe distress or discomfort." Category E includes "procedures which cause severe pain near, at, or above the pain tolerance threshold of unanesthetized conscious animals."

No numbers are given for category A experiments. About 1,123,750 are listed as category B. There are almost as many listed in category D --1,108,177. That’s right: one third of all the experiments done using animals cause "moderate to severe distress or discomfort."  As to category E, we can be grateful that awful things were only done to 3.9% of the animals used, or 128,177.

PETA, the animal rights organization, quotes government statistics which show that in the US

and in the UK, there are

My new book SMARTS tells the story of the evolving meaning of intelligence—and who or what displays it. The early natural philosophers assumed that only people are really smart, and many later ones argued that intelligence is what defines us as a species, sets us apart from all the rest. Though there have been bursts of interest in other forms of intelligence since Darwin’s day, especially in the smart behavior of plants and pets, things learned have been forgotten again, only to be rediscovered decades later. So the story of intelligence remained pretty much all about us until Jane Goodall studied chimpanzees in the field. She reported that they do most of the same things we do. They have cultures, they make tools in different ways, they hunt, make war, commit murder, show love and experience fear, have societies. Frans B.M. de Waal later demonstrated that they have politics too. In short, they are smart and very much like us in the way they organize their lives.

Why does this matter? We have traditionally treated all living beings other than ourselves as things that may be bought and sold. In the past, we even treated some human beings—slaves-- as things until we outlawed slavery in 1948 by international agreement. (ISIS and Boko Haram are trying to bring it back.) Like everything else about human societies, doctrines on the nature of things versus beings are in flux. People are treated as things, and things treated as people, depending. In the last century we began to treat ideas—corporations-- as legal persons with rights,including the right of free speech.

We have often used measurements of intelligence to decide who is entitled to civil rights. We still take rights away from children or the mentally disabled. In Ontario, for example, for more than a century we locked up children who did very badly on IQ tests in so called hospital-schools where they were neither schooled nor healed.  Only recently did the government close down these institutions, acknowledge the harms done in them, and pay money to the victims.

I wrote two weeks ago about the use of the courts in the US to try and extend the right of liberty to four chimpanzees held by private owners and institutions in New York State. The Nonhuman Rights Project launched applications for writs of habeas corpus, one of which will be heard at the end of this month in a Manhattan court room. The legal argument will be about the right to hold two chimps subject to biomedical experiments at Stony Brook University. The application turns on affidavit evidence as to their capacities, their intelligence, their suffering. If this habeas corpus writ doesn’t succeed, the Nonhuman Rights Project has a writ of another kind up its sleeve, the writ de homine replegiando which is even more deeply rooted in British common law than habeas corpus.

According to lawyers Blake M. Mills and Steven M. Wise (both associated with the Nonhuman Rights Project) in a paper just published  in the George Mason Law School Journal, this writ may apply in Britain and all former British colonies, including the US, Canada, Australia, New Zealand, Jamaica, etc., unless specifically expunged by statute. It was mainly used in the US by slaves arguing that they were being improperly held. The virtue is its process: a third party can make an application on behalf of an individual or thing, such as a slave or even a ship, and the person doing the holding has to demonstrate that they have the right to do so. While habeas corpus applications are heard by a judge,  de homine replegiando applications may be decided by a jury, and damages may be awarded. They can even be heard by a court that may not have jurisdiction over the area where the person or thing is being held, so long as the court has jurisdiction over the wrongdoer.

This writ will be tried on behalf of non humans,  you may be sure, and sooner, rather than later. And there is a good chance it will succeed.

If the courts do find that nonhuman apes have rights, what about smart, autonomous machines? As one reader of this blog queried: what happens if apes get rights and then one kills another? Would that result in a charge of murder brought against the killer ape? And following this logic along, what happens when we create intelligent autonomous robots to carry and use arms? If they are smart enough to aim and fire without human intervention, and  kill someone, can-—will-- a robot be tried for murder? And what if a smart robot kills—or destroys-- another smart robot? Or imprisons or decommissions it?