My new book: On the Origin of the Deadliest Pandemic in 100 Years: An Investigation 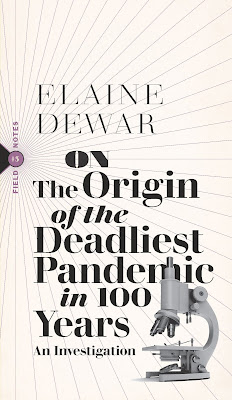 On the Origin of the Deadliest Pandemic in 100 Years: An Investigation is the title of my new book. It is the product of more than a year's hard digging into the origin of the SARS-CoV-2 virus. It will be out by the end of August in Canada, the first week in September in the US.

It is without doubt the hardest book I've ever written. Doing an investigation during a pandemic required me to reinvent the tactics I used when I started in journalism in the early 1970s. My first job for Maclean's Magazine was to research a story on the planned Montreal Olympics for a writer who had strong opinions about why it shouldn't go forward, but no facts to back them up. To do that project, I rarely left the periodical section of the University of Toronto's Robarts Library because what I found there about past Olympics --all had involved financial boondoggles-- was great support for the writer's argument. ("You found this in the library? In the newspapers? In magazines? Really?") To do this one, I rarely left the house, working instead on two computers and a smart phone which provided instantaneous access to a tsunami of information. In the beginning, when we were locked down, no one was allowed to leave their home for any reason other than to buy food (and toilet paper) or for a medical emergency. Even if I'd ignored those rules, it wouldn't have got me anywhere. Most of the researchers I wanted to interview don't live in Canada and weren't in their labs anyway.  The borders were shut. Most government officials were working from home. Parliament was closed. So I was forced to develop my own imperfect version of the method of inquiry once wielded like a broadsword by the legendary US journalist I.F. Stone. His most important scoops came from careful reading of public documents and deft use of the Freedom of Information Act.

I read everything I could find in learned journals, in pre-print literature and on academics' blogs about the nature of SARS-CoV-2, its relationship to other coronaviruses, its chemistry, its evolutionary history, the very unusual structure of its genome and its near perfect adaptation to human beings from the very start of the pandemic. I scoured the worldwide daily press, dived down many internet rabbit holes, made too many access to information applications. Most knowledgeable researchers, to my surprise, didn't answer my emails. That was a first: usually scientists want to discuss their work with journalists. It helps them climb the tenure ladder to get their ideas circulating in the broader community. More astonishing was the lengths to which civil servants went to protect themselves and their political masters from embarrassment by means of improper redactions and outright refusals to comply with the access to information law. As I figured out who I had to talk to, if they responded (a few did) I  interviewed them by means of email and telephone. But it was mainly through their published works that I came to know then. What I learned about the way globalized virological science has been practiced over the past twenty years surprised and enraged me. Certain names kept coming up: Shi Zhengli, Linfa Wang, Peter Daszak, Ralph S. Baric, Kristian Andersen, Zhihong Hu, Xianguo Qiu, Keding Cheng, Chen Wei, E.C. Holmes, George Gao.

The book is both a detection narrative and an exposition of the political and scientific context for the worst public health disaster since the great flu epidemic of 1918/19. It points fingers. It names names. It describes the way in which the government of China, from the very beginning, withheld vital information and promoted false-by-omission scientific narratives in order to deflect blame even as it permitted the virus to spread. China's relentless PR campaign began at the end of December, 2019 even as the first mention of a nasty pneumonia circulating in Wuhan found its way to social media sites and from there to the West. China was helped in its efforts by the WHO, whose job is to protect the world from such disasters, and even more shockingly by some of the world's best scientific journals, our leading coronavirus experts and the US institutions which fund their work. All were more anxious to protect their interests than to pursue the truth. The book describes in detail how China used the globalization of biological science as cover for dual-use research that could not be done at home, reaching into the most secure laboratory in Canada for the study of the most dangerous pathogens  (Ebola, Marburg, Nipah). China's top military/civilian scientists (there is no boundary between them) used it as if it were their very own lab for years.

More than 4 million people are known to have died from SARS-CoV-2 since December, 2019. That number is at least twice as high if suspected, but not certified, COVID deaths in India are factored in. It will continue to grow as the virus wends its way throughout the mostly un-vaccinated developing world, mutating as it goes, stumbling on ever more clever means to infect humans and the susceptible animals that live near us. These deaths are not and will not be the result of an unavoidable accident of nature: they are and will be the product of the very best human minds.

As the 4th wave begins, it's time to hold some of those humans to account.