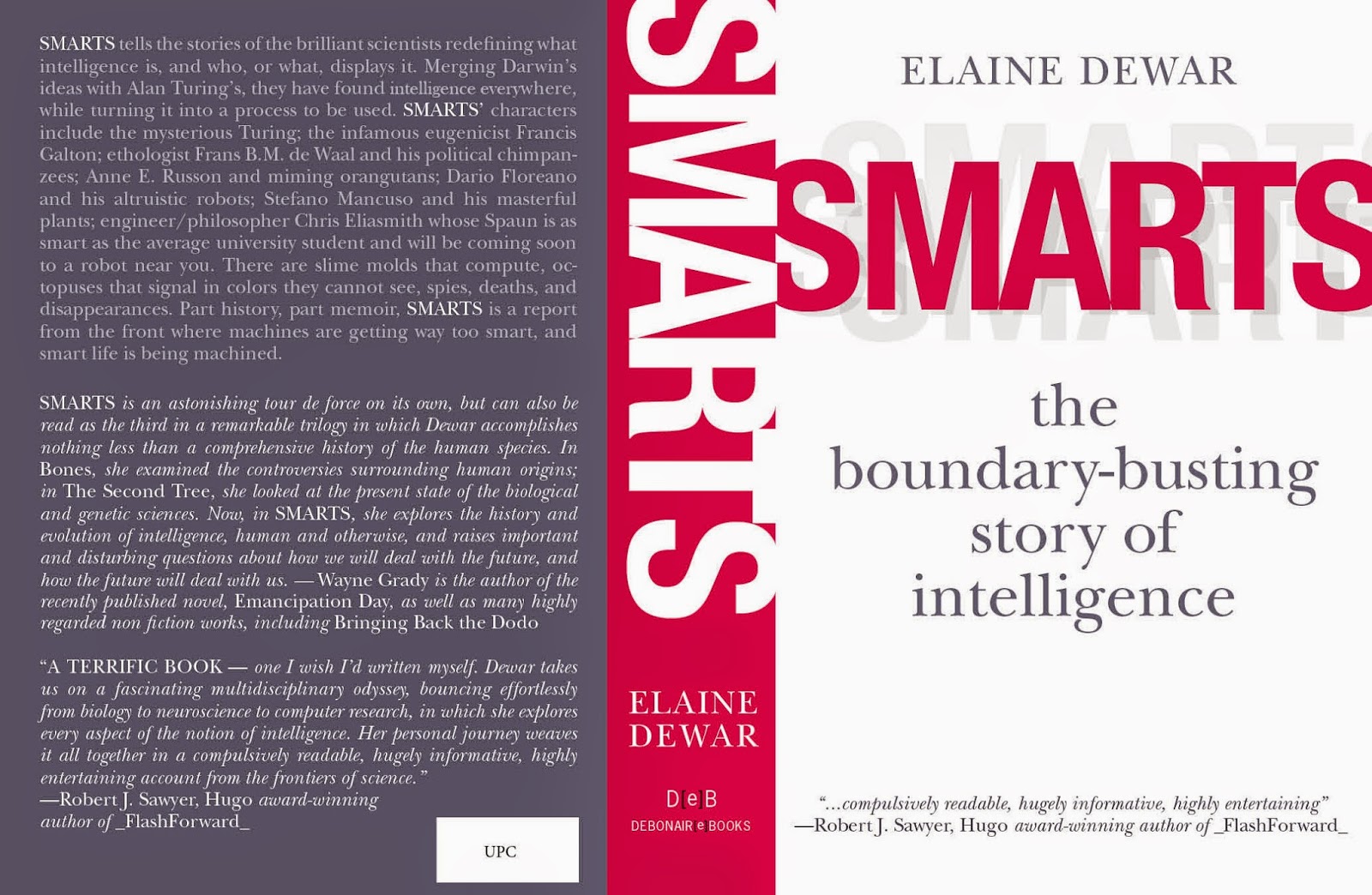 
Praise for SMARTS (from popular non-fiction and sci-fi authors):

"Everyone should read this book. Journalist Elaine Dewar has once again produced a work that covers all the ground of her particular subject, has rendered the research and ideas in language even I, thoroughly non-scientific in ideas and training, have been able to read with a good degree of understanding. I was so fascinated in places that I began to wonder if it is too late to study biology or maybe to try mathematics one more time. (Yes it is.) As a creative personality, a writer of fiction and creative nonfiction, I kept objecting to where the science seemed to be taking us, but the riveting story and the accessible prose carried me through to the end. We all owe Dewar a debt of gratitude for this marvelous work about humans struggling to understand intelligence."
Sharon Butala,Officer of the Order of Canada, shortlisted for the Governor General's Award for both fiction and nonfiction, is the author of sixteen books including the bestseller The Perfection of the Morning, and The Girl in Saskatoon: A Meditation on Friendship, Memory and Murder, HarperCollins. Her forthcoming novel Wild Rose, will be published by Coteau Books. www.sharonbutala.com
"Smarts is an astonishing blend of science and memoir, at once an investigative essay and a profound work of the imagination. It is the third in a remarkable trilogy in which Dewar accomplishes nothing less than a comprehensive history of the human species. In Bones, she examined the controversies surrounding human origins; in The Second Tree, she looked at the present state of the biological and genetic sciences. Now, in Smarts, she explores the history and evolution of intelligence, human and otherwise, and raises important and disturbing questions about how we will deal with the future, and how the future will deal with us. It flows with the swiftness of thought itself."
Wayne Grady, author of the recently published novel, Emancipation Day, as well as many highly regarded non fiction works, such as Bringing Back the Dodo.

"A terrific book -- one I wish I'd written myself. Dewar takes us on a fascinating multidisciplinary odyssey, bouncing effortlessly from biology to neuroscience to computer research, in which she explores aspect of the notion of intelligence. Her personal journey weaves it all together in a compulsively readable, hugely informative, highly entertaining account from the very frontiers of science."
Robert J. Sawyer, Hugo Award-winning author of _FlashForward_


“Coupled with the extensive documentation of published cognitive research, Dewar’s gripping journalistic approach makes Smarts into a particularly rewarding book for those of us who ponder the mysteries of how living organisms can be so complex and get so much right so often.”
–James A Shapiro, (one of the preeminent Bacterial Geneticists of his generation and Professor in Department of Biochemistry and Molecular Biology at the University of Chicago) in Plant Signaling & Behavior  (a scholarly scientific journal)

“With a breezy but meticulous writing style, and just enough sass to make you smile, Elaine reports on her interviews of some of the world’s most creative minds in science and technology, as she searches for the meaning of “intelligence.”… Even though I may not understand the chemical processes and algorithms, however, I understood what she was getting at…people are pursuing ideas that are literally changing the world…slime that thinks…plants that plan…technology that evolves independent of humans…governments and industries are investing big bucks in pursuing the implications for non-human intelligence. And the public is completely unaware – unless they read SMARTS.”
CLICK TO READ THE FULL REVIEW Dawn Forsythe, Chimp Trainer’s Daughter

Smarts tells the stories of the brilliant men and women who are redefining what intelligence is and who or what displays it. Merging Darwin’s ideas with Alan Turing’s, they have found intelligence everywhere, and in everything, while turning it into a process to be used. Smarts’ characters include the mysterious Turing; the infamous eugenicist Francis Galton; ethologist/psychologist Frans B.M. de Waal and his political chimpanzees; Anne E. Russon and  miming orangutans; Dario Floreano and his altruistic robots; Stefano Mancuso and his masterful plants; engineer/philosopher Chris Eliasmith whose simulation of intelligence is as smart as the average university student and will be coming soon to a robot near you. Along the way, there are slime molds that compute, octopuses that signal in colors they cannot see, mysteries, spies, deaths and disappearances. Part history, part memoir, part politics, Smarts is a report from that dangerous front where machines are getting way too smart, and smart life is being machined.

Debonair[e] will publish in English in the United States, the United Kingdom, Australia and New Zealand in print-to-order and e-book versions for all platforms.