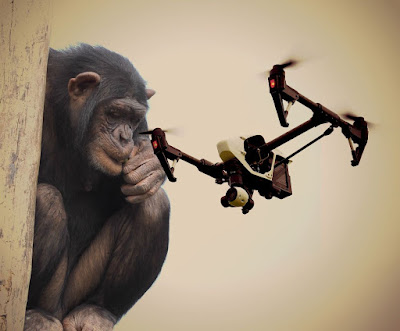 The drone downer was a middle-aged female, a member of a long-established chimpanzee colony at the Royal Burgers Zoo in Arnhem, The Netherlands. The chimps at this zoo live together as naturally as is possible when kept in an enclosure surrounded by a moat (in which one of them once drowned) in spring and summer, or, when locked up in a large common room and sleeping cages in winter.

Last spring, a noisy drone was test flown over the enclosure’s grassy sward and the play scaffolding (built from dead trees). A documentary maker shooting a “PR” film for the Zoo wanted to use a camera mounted on it to get good overheads. When the drone first entered the chimps' airspace, four of them grabbed a few willow twigs from the ground and climbed up the scaffolding to get closer to where it hovered. The drone flew away. As if they knew it would return, they waited. When it came back, its camera live this time, it zoomed close to two adult females,Tushi and Raimee, who lay in wait about five meters up. Tushi, 23, and Raimee, a teenager, had worked together to haul a long willow branch up there. When the drone got too close for its own good, Tushi made “two long sweeps with her branch which she held in her left hand. The second one was successful and brought the drone down.”

As the drone lay broken on the ground, several other chimps poked and prodded at it with short sticks of their own, dragging it around. The camera, still rolling, caught their inquisitive faces peering down at it. When the drone failed to move again, the chimps eventually lost interest and wandered off.

An academic paper about this incident appeared in an online journal (Primates) last month, which is how the newspapers found out about it. The newspapers, being newspapers, left out the back story. The back story concerns this group’s role in teaching reluctant scientists that chimpanzees are almost as smart as we are and organize themselves politically, as we do.

The academic paper had two authors, Jan van Hooff and Bas Lukkenaar. Van Hooff has enjoyed an illustrious career studying “the ethology and socio-ecology of communication and social organization of primates” which can be translated into simple English as learning how chimps live together.  Van Hooff’s family owns the Zoo. Because they had a large open space available, the van Hooff’s decided in 1971 to try to bring unrelated chimps of both genders together in the hope that they could live as a group, as chimps do in the wild.  Adult males are renowned for their aggression. Would they curtail it when living among animals they weren’t related to? Or would the colony explode? The study of aggression was particularly fascinating to the European ethologists of the period. Some argued that evolution had hardwired aggression into chimps, our closest living relatives, and therefore it was probably hardwired into us too, making war inevitable. The colony survived, and many of the chimps living in it now were born there (including Tushi, the drone slayer).

This colony was made famous thirty years ago by one of van Hooff’s associates, Frans B.M. de Waal. De Waal was just a junior ethologist with a new PhD when he arrived at the Zoo to study the chimps in the 1970s. He has since become a leading cognitive ethologist, occupying a chair in psychology at Emory University in Atlanta. He is also the author of many bestselling books on chimp and bonobo behavior, most recently a book on the evolutionary roots of bonobo morality. It was de Waal’s published descriptions of the Arnhem chimps’ intelligent political behavior that started me on the long path to my new book, SMARTS, way back in the 1980s.

Early in that decade, I was hired to story edit and write scripts for a television nature series called LorneGreene’s New Wilderness. Many of our shows dealt with the then new research demonstrating intelligent behavior by all kinds of animals.

The idea that human beings might not be the only intelligent life forms on this planet had been explored by Charles Darwin and his son Francis in the late 19th Century.Together, they studied the intelligence of worms and even plants. But after Darwin's death,the notion that animals or plants might be intelligent was declared by leading thinkers to be nothing more than wishful thinking on the part of the deluded. Anthropomorphism was the scientific term coined to describe this delusion.

Up until the early 1980s, most leading orthodox psychologists and zoologists dreaded being accused of anthropomorphism which may be why they failed to consider how living things other than humans learn, plan, find prey, mates, and protect their young. These behaviors were generally written off as innate, inborn, requiring no flexibility or decision making at all.  But after Jane Goodall reported tool making and tool use among chimpanzees in the wild, young scientists with other ideas about intelligence had gone to work. [Please see the first five chapters of SMARTS for this history.] New Wilderness showcased the findings of many of these young radicals who reported on the intelligent, flexible behaviors of orangutans, orcas, wild dogs, etc.

In the third year of the series, I was assigned to edit and write a show about the chimpanzees at the Burgers Zoo. De Waal had just published his first book. He called it Chimpanzee Politics. It touted their amazing capacity for political behavior that even humans could learn from. The adult males in particular, we were told, made alliances in the search for power, and when they fought, quickly reconciled. We ended up doing two shows on these chimps, because, while doing the first, we learned that de Waal had not published important information about the chimps' failures to reconcile-- failures that resulted in a political murder and suicide.

So I read the current paper on the drone downing chimps with a certain interest, expecting to find new insights about how they organize themselves. Instead, it was as if nothing much had been learned about their behavior since de Waal moved to the US. According to Lukkenaar and van Hooff, the chimps at Arnhem regularly make tools out of branches and other useful things that they find in their territory. It was acknowledged they are very careful to use the right tool for the right job. Nevertheless, the authors deployed what can only be called indeterminate language to explain the drone downing incident. It was if they were afraid to assert that chimps had made a plan to take out the drone, and carried it out. “The use of the stick in this context was a unique action,” van Hooff and his colleague wrote. “It seemed deliberate given the decision to collect and carry it to a place where the drone might be attacked. This episode adds to the indications that chimpanzees engage in forward planning of tool-use acts.” [Italics mine.]

They barely acknowledged what de Waal had described as “‘political’ scheming and coalition formation, especially of the adult males." It was as if political behavior is somehow a lesser achievement than knocking down a drone. In fact, planning and staging serial coups is a tad more intellectually challenging, and the Arnhem chimps could teach the human males currently climbing the greasy pole of Canadian politics a thing or two about how to dump a powerful alpha male.

Starting in the the late 1970s, the leading males of this colony formed and reformed competing alliances to take down whichever one of them successfully became the alpha. The eldest male, Yeroen, who had once been the alpha, managed to hold onto some of his old power through at least three such changes in leadership, always teaming with an up- and-coming lad he could manipulate to share what the alpha gets by right—access to ready females. These triads were shaky. The females were often called on to take sides.The males squabbled, fought, reconciled, squabbled, fought, reconciled, until one day each ruling alpha found himself out in the cold and a new alpha declared by a triad which always included Yeroen.  These machinations eventually grew so heated that one of the males was murdered (his balls were ripped off) in a political assassination. Another who must have participated in that murder probably committed suicide in order to avoid being dealt with later in the same way.

Frans B.M. de Waal described these behaviors as Machiavellian. This was no insult to Niccolo Machiavelli, a one-time top civil servant, poet, critic, and observer of power in Renaissance Florence. His reflections in The Prince on how power should be used, and how it may be acquired and held, are still read more than half a millennia after his death for good reason. What de Waal made clear is that the chimps at Arnhem figured out for themselves many of Machiavelli’s recommended maneuvers without Aristotle’s sine qua non for political action—the power of speech. De Waal made his readers see themselves reflected in the chimps' lives and by doing so, he made us see human intelligence as something that is part of a continuum, that is utterly integrated into the rest of nature.The chimps' political adroitness was sufficiently interesting to a senior practicing American politician, Newt Gingrich, that when he became Speaker of the House, he insisted freshmen Congressman must read de Waal’s book.

That being the case, you might ask why is it that so many academics studying such intelligent animals still held in zoos and labs thirty years later, are so loathe to call what they see by its proper name: intelligence. You might ask why they use weasel words instead of plain English to describe the behavior of a chimpanzee who works with a partner to haul a branch up into a tree, and take down a drone.

Is it because they would then feel compelled to let such smart animals be free?
Posted by ELAINE DEWAR at 15:48