SMARTS Update: Damn Those Martian Microbes, they're Smarter Than Ours 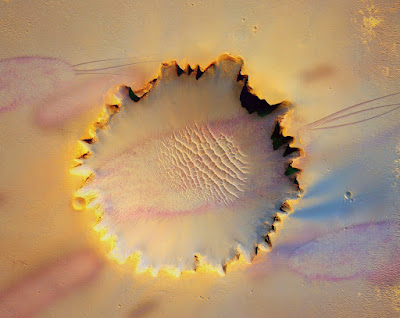 Some mornings when I open the newspapers I find good reasons to bang my head on the kitchen table. It’s not just the reports of war, cruelty, mayhem, and the never-ending speculations on the horse race called the Canadian federal election. It’s the way we humans constantly describe ourselves as lonely individuals who exist outside nature, beyond the grip of evolution.

Take last Monday. As I picked my way through the Martian water stories on the front pages, I found myself muttering at my husband (who ignores these eruptions until I erupt about that). How come what’s obvious in one area of study remains terra incognita to another, I asked? Or, to put it another way, how come the planetary geologists in these stories are so gung ho to go to Mars instead of sending more smart robots?

It’s as if they have no understanding of what biologists have learned about nature during the last half century, or they have decided to ignore it. And that’s ridiculous because it was the findings of geologists that gave Darwin his first inkling about the process called evolution. For millennia before Darwin, we told ourselves that we humans are the smartest of God’s creations, and we stand alone. After he described the evolutionary process, generations of scientists still remained in thrall to these older ideas or were afraid to counter them with observations. That's why they took their sweet time to go out into the world and look at how other living things make their way through it. For example, nobody knew that chimpanzees in their natural habitats (as opposed to those locked in cages), go to war, make tools, mourn their dead and adopt babies until after 1962. Why? No one studied them in the field until Jane Goodall did it. Yet that failure had not prevented her predecessors from stating as fact that only humans make tools. And that didn’t prevent her colleagues from asking her to suppress what she knew about their warlike behavior. The last time I went through London’s Natural History Museum one exhibit's copy declared that only humans make tools to make tools. Really? Are you sure?

Since Goodall’s explorations, many biologists have demonstrated that we are in fact surrounded by, and integrated with, other smart living things [see my new book SMARTS for details]. Yet the notion that we are above and apart from the all the rest still persists. One big boundary that many psychologists still cling to is language. There is a whimsical belief that no living things can talk except us. But libraries are full of published work that shows how plants, animals, and microbes pass information to each other, and to us. The means are: molecules, gestures, sounds, music, and other types of signals. Those concerned with human disease are just beginning to realize how vital this cross-species talk-- or lack of it-- can be. Two weeks ago I wrote of the possible relationship between disruptions in peoples’ microbial populations and schizophrenia. This week, right after the Martian water story appeared, a Canadian group at University of British Columbia published more fascinating results on the relationship between microbes and human health in Science Translational Medicine. Their work involved data from a longitudinal health study of Canadian children. The authors determined that the absence of four gut bacteria in the first 100 days of a child’s life may increase that child’s risk of developing asthma, a very widespread chronic disease, later in life. [These microbes are identified as Lachnospira, Veillonella, Faecalibacterium and Rothia.] They also showed that by inoculating germ-free mice “with these four bacterial taxa” they “ameliorated airway inflammation in their adult progeny, demonstrating a causal role of these bacterial taxa in averting asthma development.” In other words, our children's health depends upon our being infected with appropriate microbes before their birth or shortly after. These microbes somehow fight inflammation and help keep us breathing. Apparently, these same microbes have long had the same kind of relationship with other mammals too, mammals with whom we shared a common ancestor about 50 million years ago.

Back to the Martian water story. At vast expense we have shipped robots to Mars and directed them to take samples and pictures of whatever they encounter and to report back. When some scientists saw black streaks appear and disappear on images taken sequentially of a Martian crater, they aimed spectrometers at the streaks to discern what they’re made of. They discovered the chemical signatures of certain salts. This led to an immediate Big Ask: we must send humans to Mars to investigate further, they said.

Their reasoning goes like this: these particular salts require water.  If streaks of these salts appear and disappear on the Martian surface, either they must once have been sucked out of geological formations by means of water in the Martian atmosphere, thin though it is, or, they must have been dissolved in water hidden below ground. Water is a sine qua non (though not a guarantee) of life. At least life as we know it.

The idea that Mars harbors water and that this implies there is life there has been proposed for generations. Percival Lowell (of telescope/observatory fame) thought the canals an Italian astronomer thought he saw on the Martian surface were like the canals crisscrossing the US Northeast. (Surely someone intelligent—someone like us?-- built them to move water?) After we got up close and personal with Mars by means of smart space probes, the canals were shown to be imaginary. But planetary geologists argued that better pictures sent back from Mars indicated that it had once sported an ocean--vanished now due to some ancient planetary scale catastrophe. The discovery of these salts could mean that some of that water still remains. Why? The streaks appear in summer, disappear in winter. One theory is that the warming surface (up to about 21C at the equator) heats frozen salty water underground. As the ground thaws, it seeps, flows, and dries, leaving the salts behind.

The justification for the Big Ask is that where there’s water, there’s life, and people are much better at hunting for life, much more dexterous, as one writer put, than any robot could be. Yet for evidence of robotic cleverness, look no farther than this video a friend (thanks Allen) sent me last week. A group of them can build a suspension bridge strong enough to hold up a person by winding a few cables on a few poles. Behind the Big Ask is the unstated but understood Big Quest: to find someone out there we can talk to.

In other words, this isn’t only about science. It’s about hopes and dreams. To hopes and dreams the salt licks say maybe. Humans need water to live. If there is water on Mars we won’t have to haul it there. Where there is water, it can be split into hydrogen and oxygen and/or it can be drunk. We could use it to rebuild the atmosphere, we could remake the sea. The hope is we humans will then be able to colonize Mars and turn it into a cooler but still viable version of Earth, a hidey hole to bolt to after we screw up everything here. The dream is that after that, we will develop warp drive and boldly go….

The problem is that this dream is founded on the ancient notion that humans exist beyond nature, that all we need to live is access to certain elements. In fact, the complexity of Gaia is what sustains us.  It might be that in order to remain human, we need to be embedded among everything else that lives here, in this atmosphere, in our oceans, in our forests, on our grasslands. If we go to Mars as colonists, we will definitely have to take our microbes with us or we won't last long. But what happens if there are microbes alive on Mars already and they mingle with ours? What if they share molecular information and thereby change each other? What happens to evolution on Mars? And never mind Mars, what if our human voyagers return, bringing changed or new microbes back with them? What if these strangers find niches here that are to their liking, with no natural predators?

I say let the robots go in our place. They can be as dexterous as we require. And very soon, they'll be smarter than us anyway.